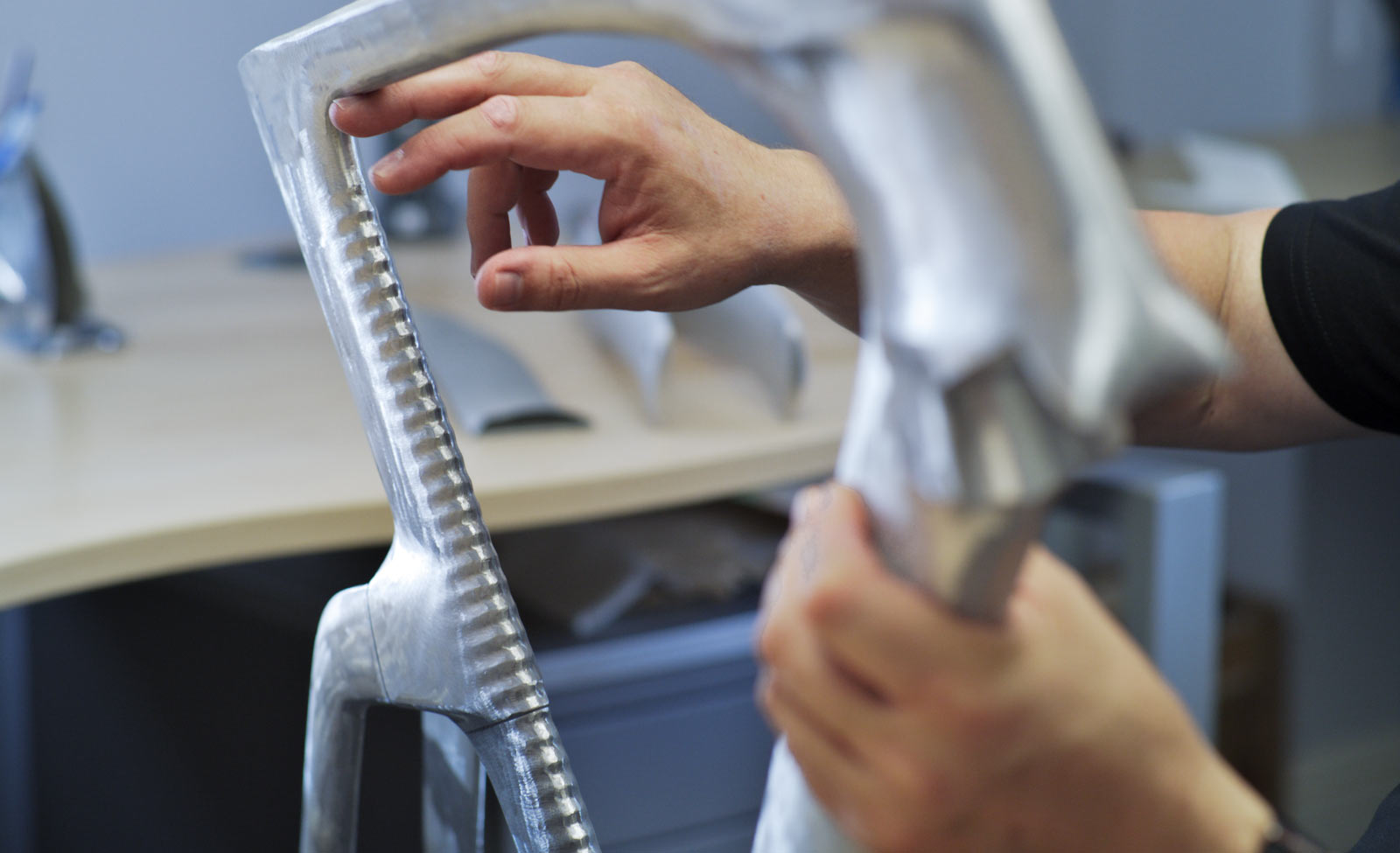 Filippo Ganna is set to attempt the Hour Record this week on a “World’s First” fully-3D-printed Pinarello Bolide F HR 3D track bike. Made of an aerospace Scalmalloy scandium alloy, the 3D-printed metal track bike is ribbed for aerodynamics in the latest instance of humpback whale biomimicry… 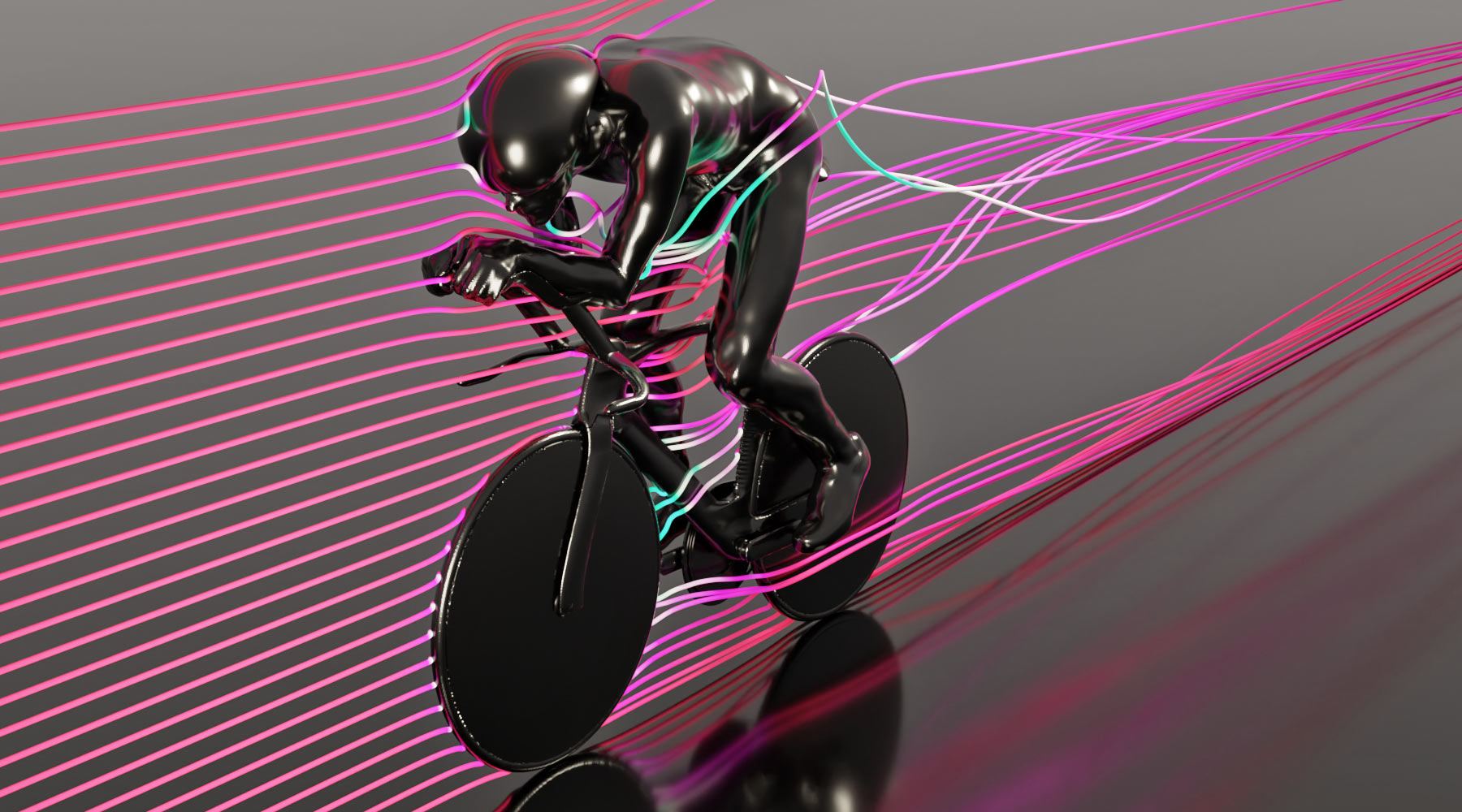 Pinarello describe the demands of creating Ganna’s Hour Record project bike as “higher than usual. The Bolide F HR 3D
needed a totally perfect fit, designed around the rider, conforming to Filippo’s unique anatomy to maximise both his comfort and overall aero performance. Comfort is often underrated, but when it comes to an UCI Hour Record timed by Tissot attempt it is absolutely crucial because it allows the athlete to go faster for longer. The importance of stiffness is also often underestimated for track bikes, but any flex under power causes the wheels to scrub, losing the athlete crucial centimetres every time they push the pedals.” 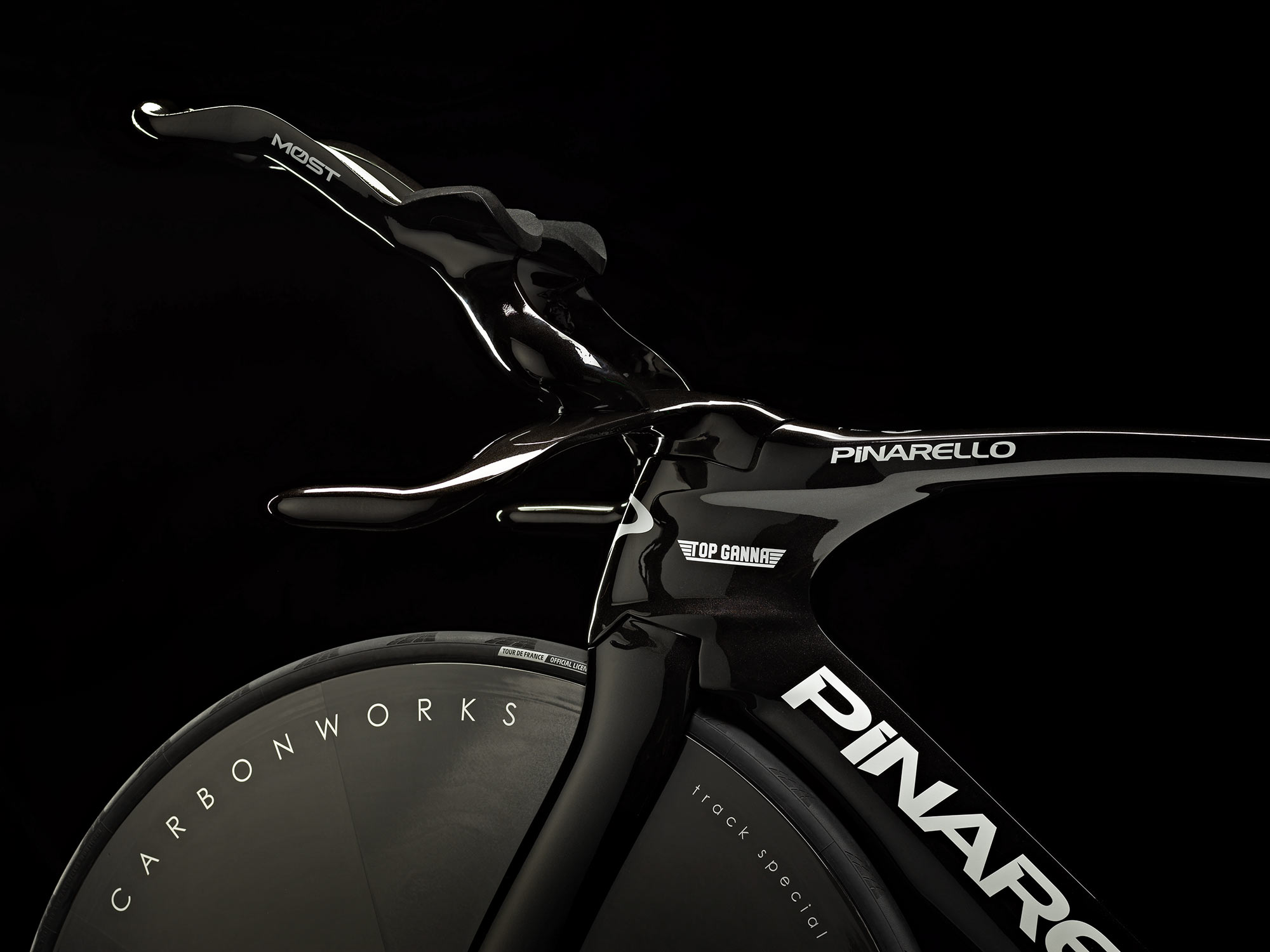 The result is said to be a more refined blend of aerodynamics, strength & stiffness – fully customizable to Filippo Ganna, but also to consumer athletes as well! 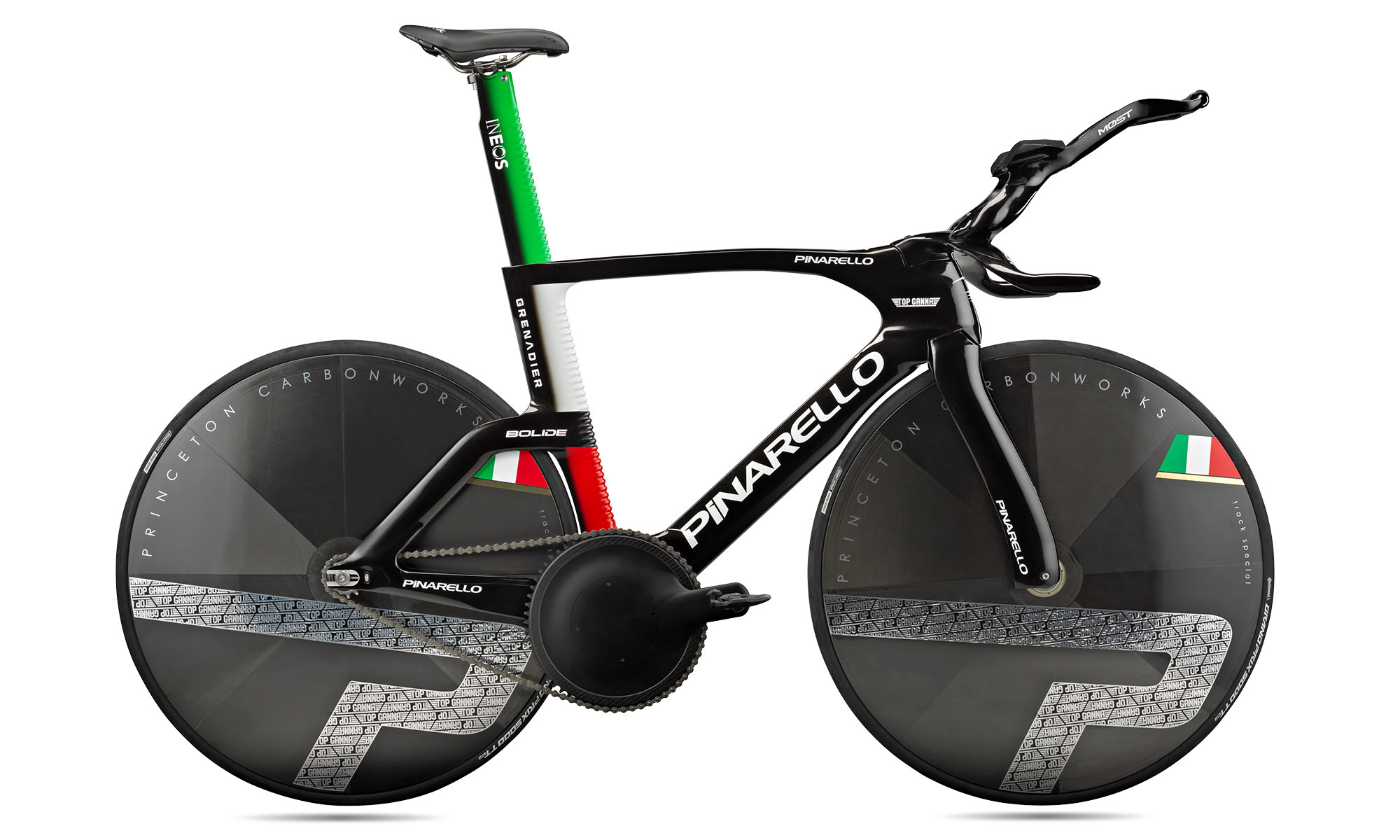 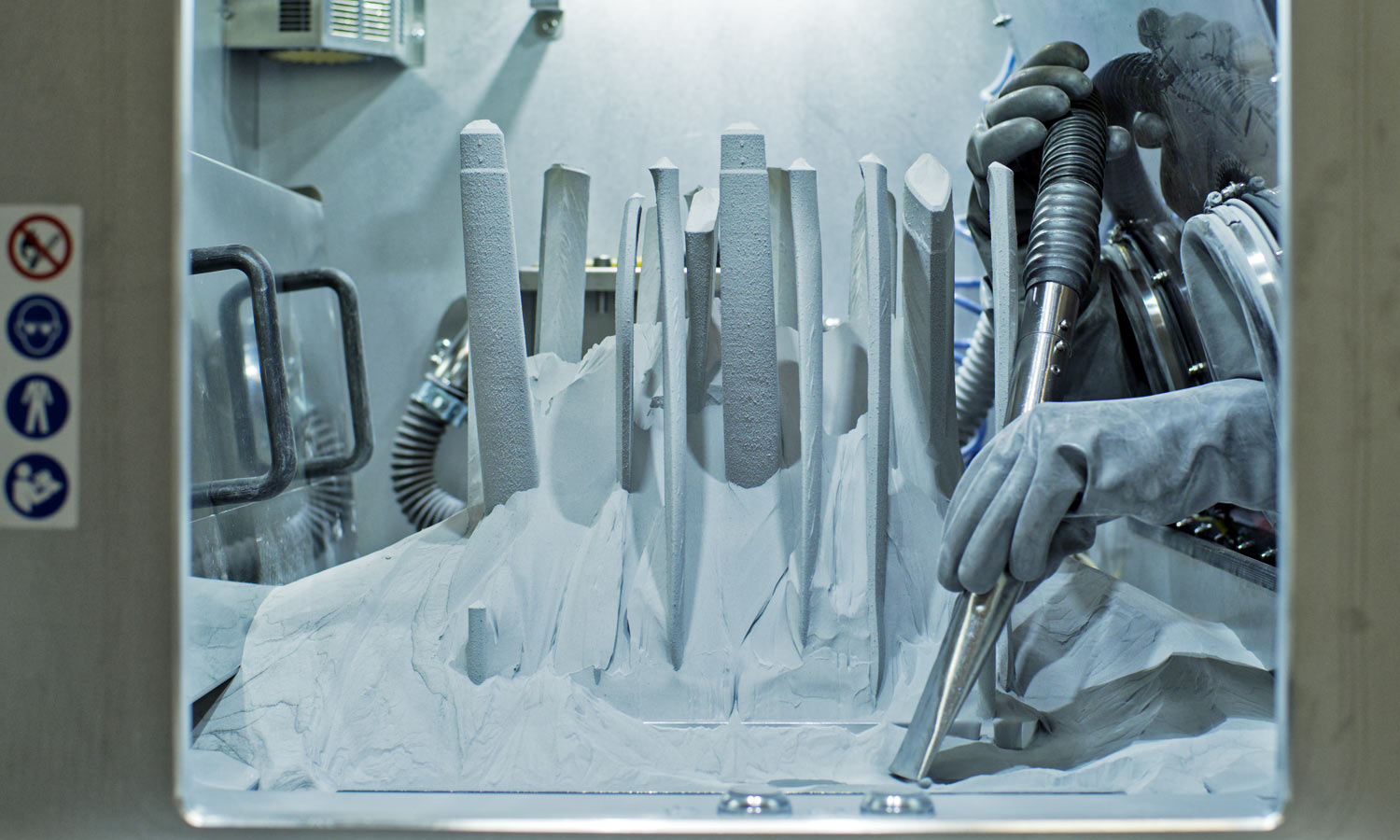 3D-printing did give Pinarello designers an unprecedented level of design control and customization potential relative to either modern carbon bike manufacturing or more conventional metal bike building. They could create a seamless aerodynamic exterior skin, while at the same time incorporating infinitely customizable internal structural reinforcements to boost stiffness exactly where the bike needed it. 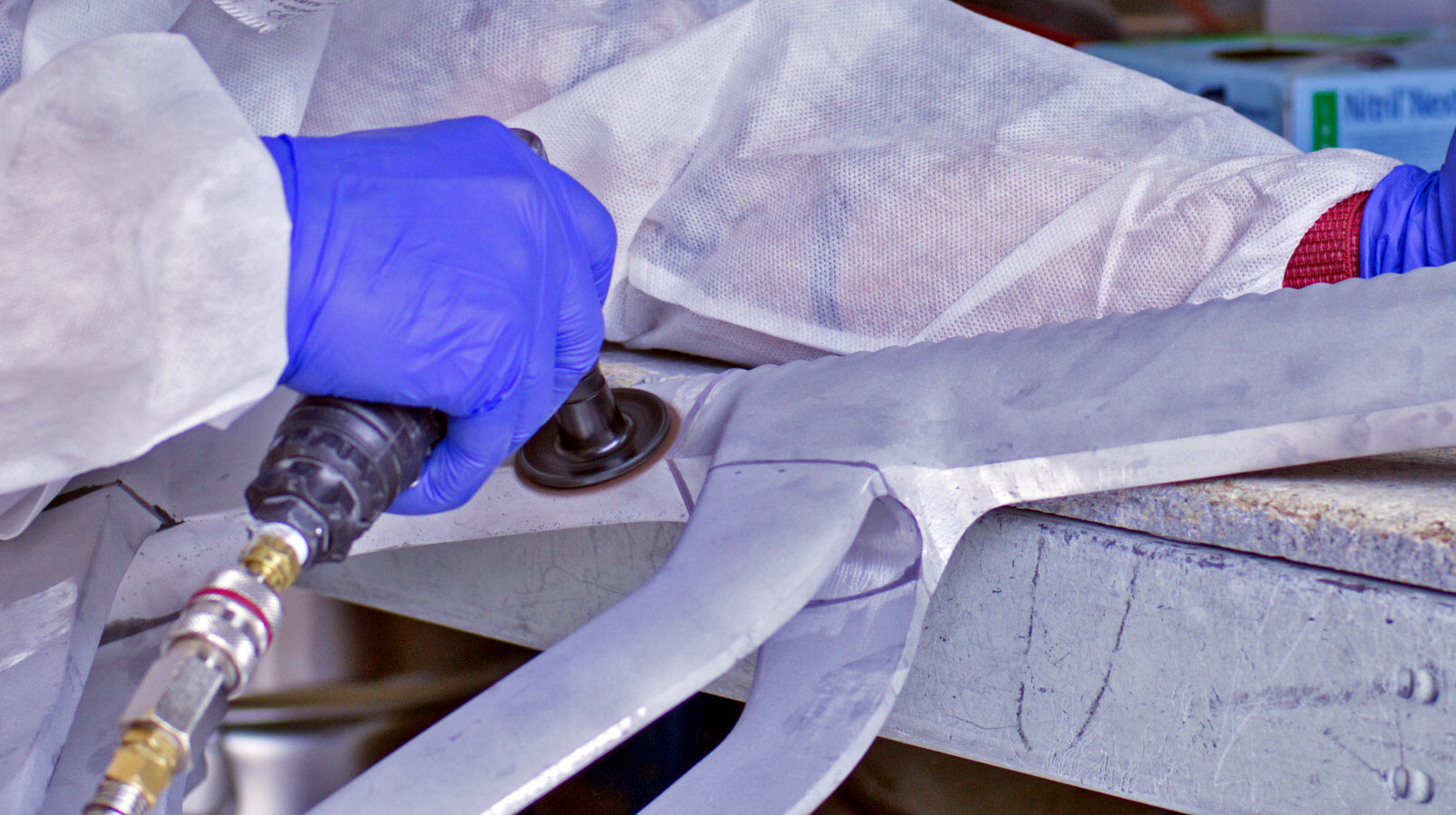 Developed with Metron A.E. in the UK, the Pinarello Bolide F 3D’s tubes are 3D-printed from a high-strength Scandium-
Aluminium-Magnesium alloy called Scalmalloy that was developed in the aerospace industry, specifically for additive manufacturing. Created on a large-format printer, the bike frame still had to be printed in 5 individual parts, that were then bonded together with epxoy after some post-printing clean-up.

Interestingly, elements of the fork’s steerer and handlebar extensions are actually 3D-printed from titanium to handle higher stresses than the Scalmalloy could manage. 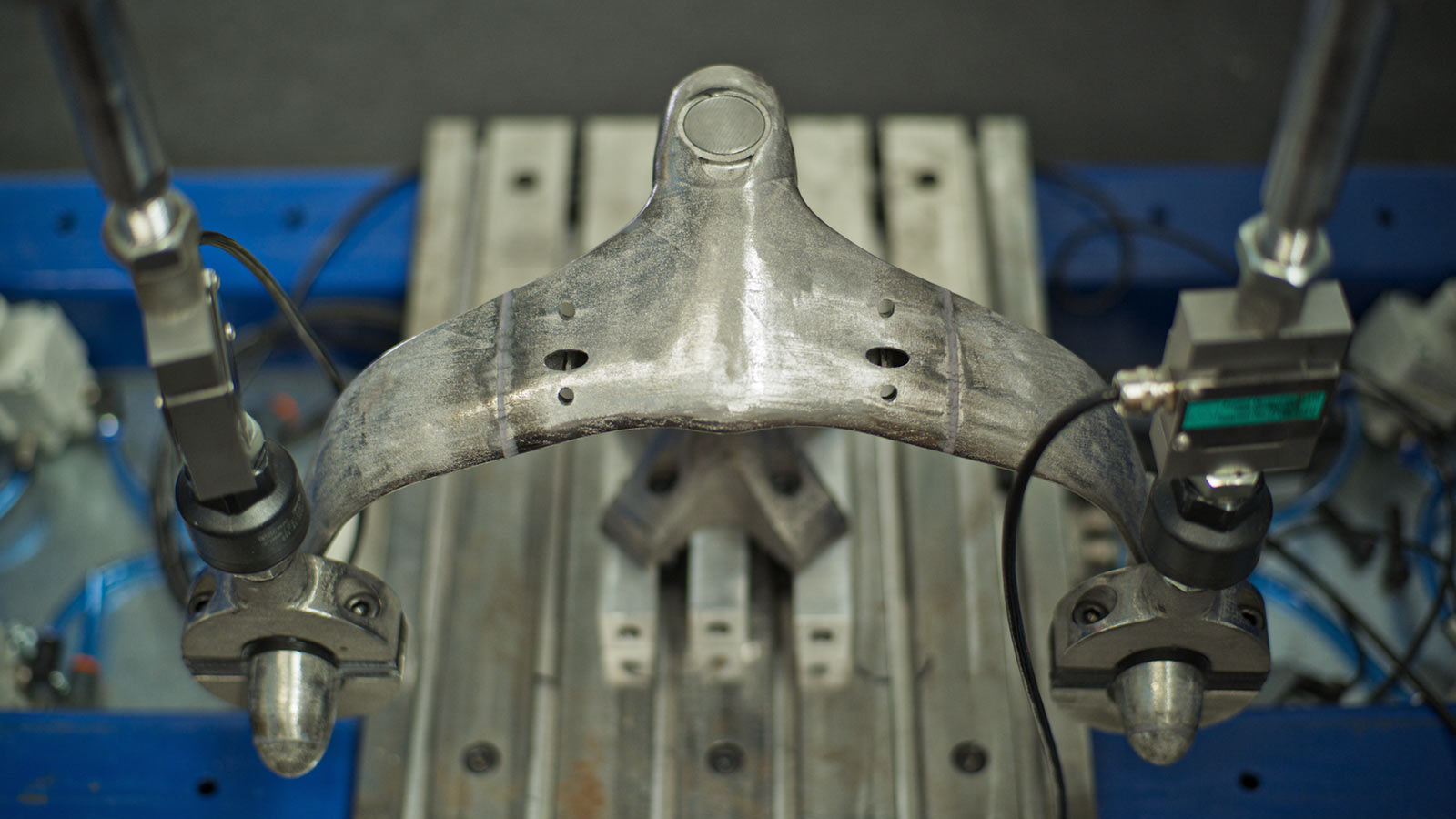 To make sure Filippo Ganna’s custom bike was strong enough & safe enough, Pinarello made an exact duplicate of it to be independently tested by EFBE in Germany. The Bolide F 3D frame, fork & seatpost passed the full range of fatigue, impact, and torsion tests as specified by ISO4210 – a first for a custom UCI Hour Record attempt bike. 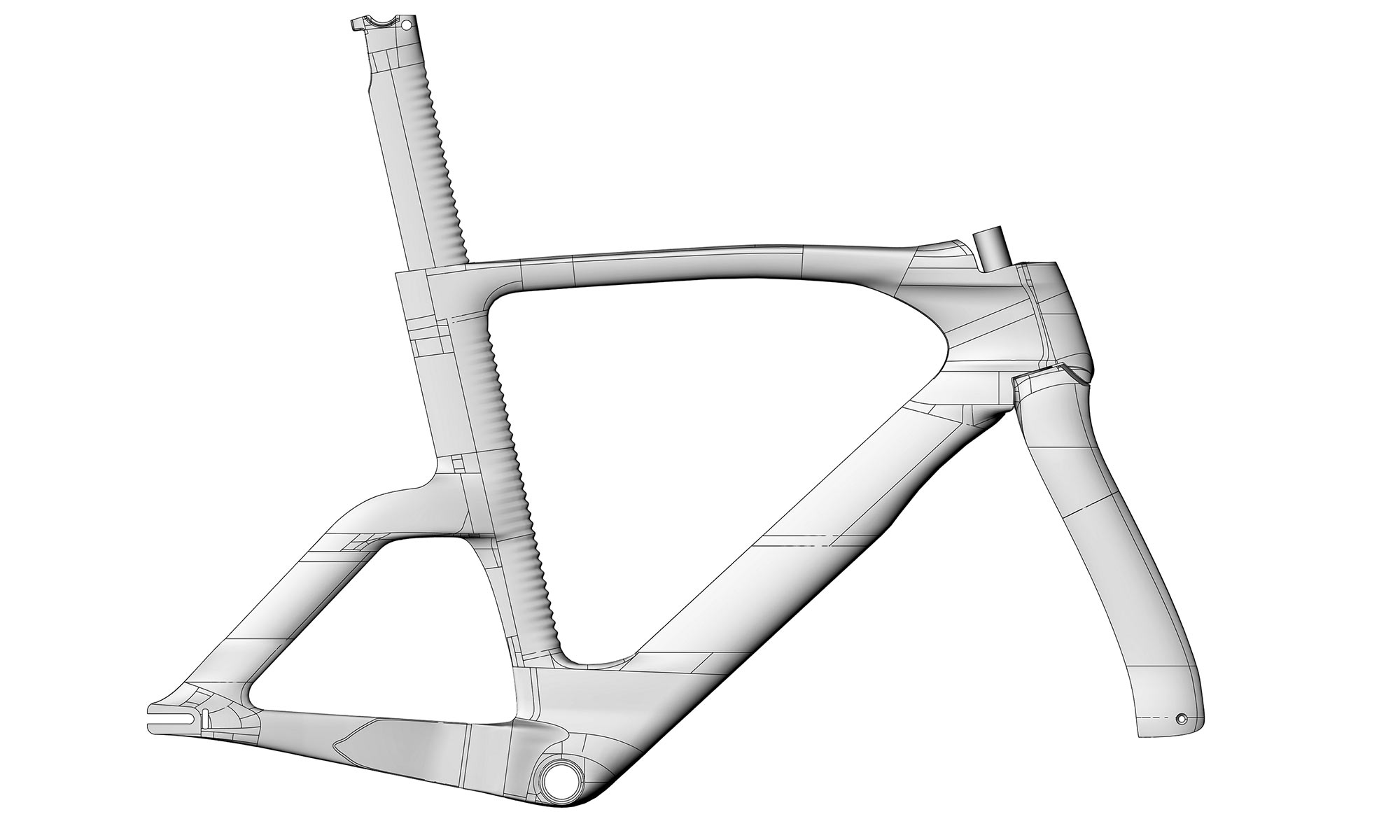 One of the standout features of the Bolide F HR 3D is its AirStream tech ribbed seattube tubercles… or AeroNodes. 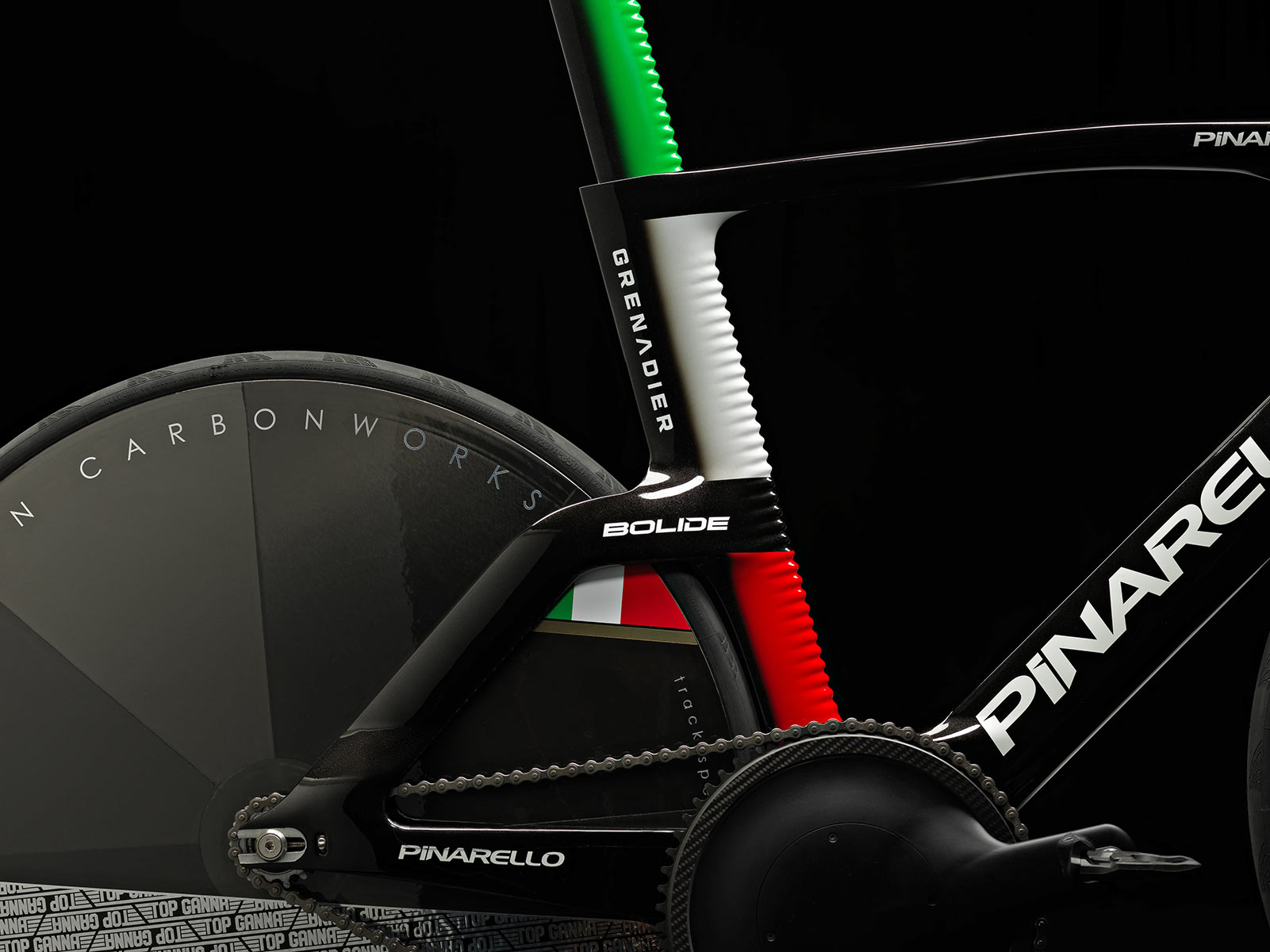 Developed based on University of Adelaide humpback whale motion research, the ribbed Pinarello seattube claims to help keep air attached to the bike as it flows past the turbulent area between the rider’s legs going up & down and the forward spinning rear wheel. 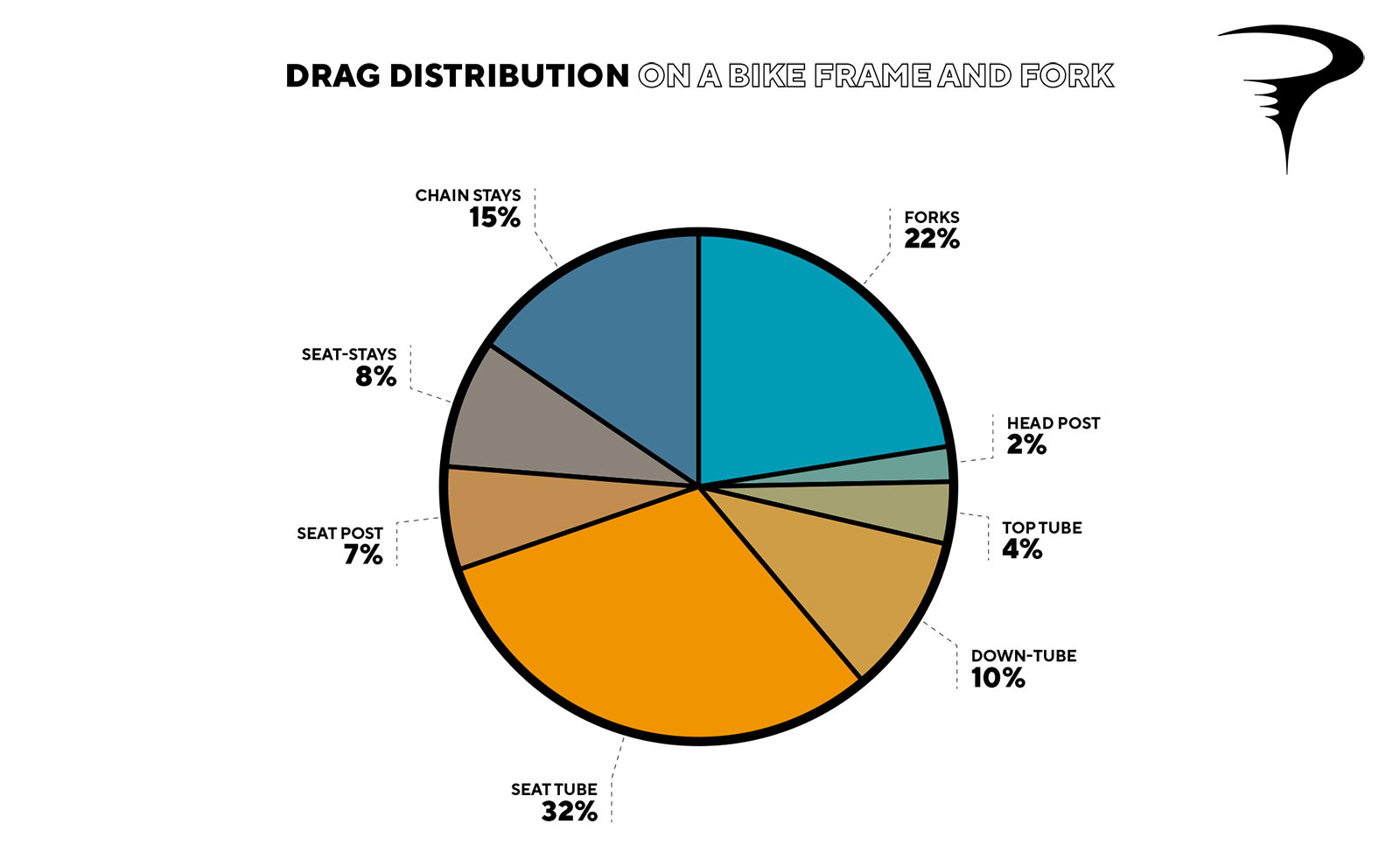 Pinarello says “almost 40% of the total drag of the frame and fork” comes from this combined drag of the seattube and seatpost. 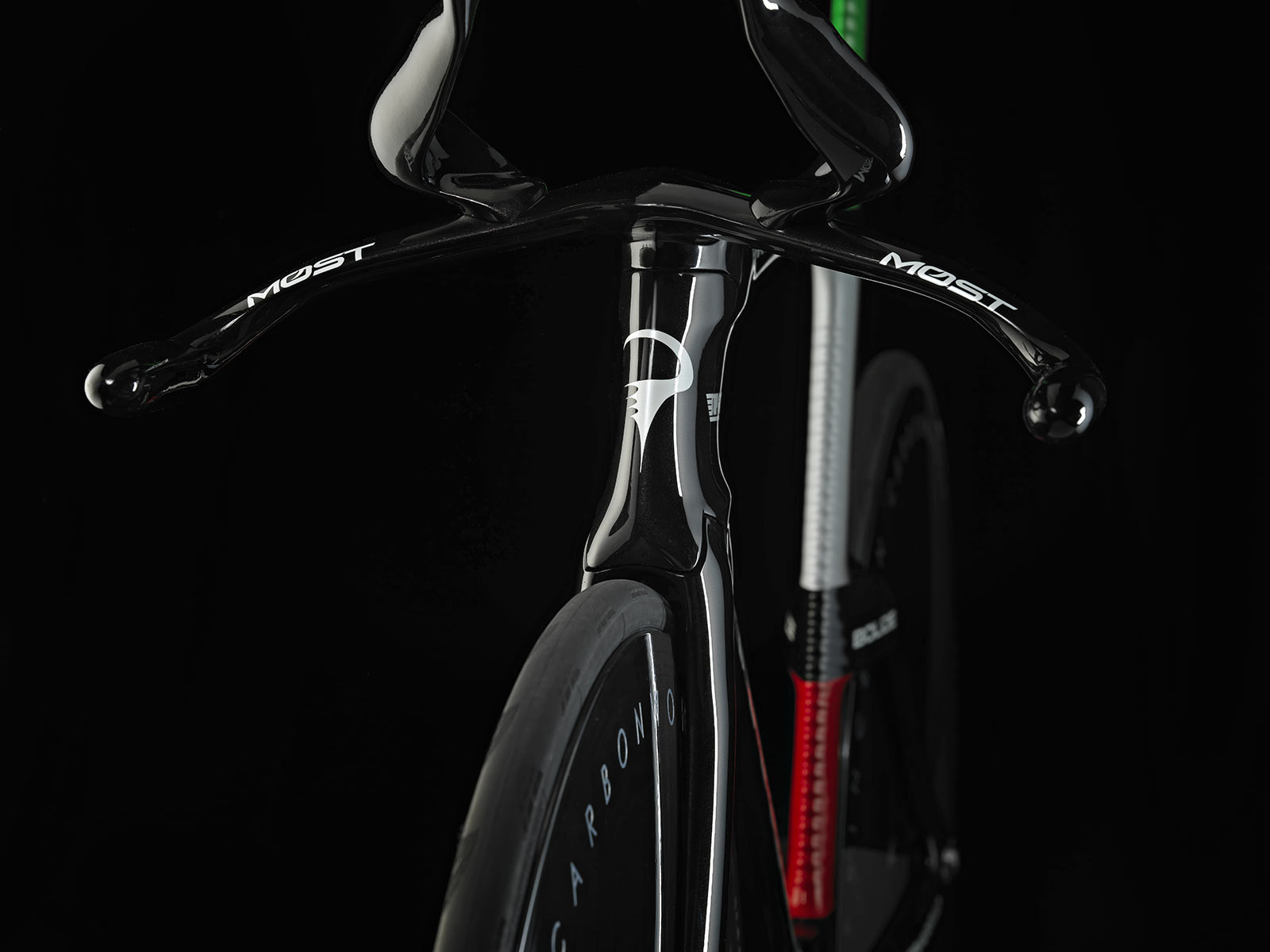 Other key tech changes, now the old UCI 3:1 rule is gone, come down to reducing frontal area. This new bike uses a narrower 54mm bottom bracket (down from the 68mm standard), and extra-narrow 69mm front hub spacing (down from 100mm) & 89mm rear wheel spacing) down from 120mm track standard.) 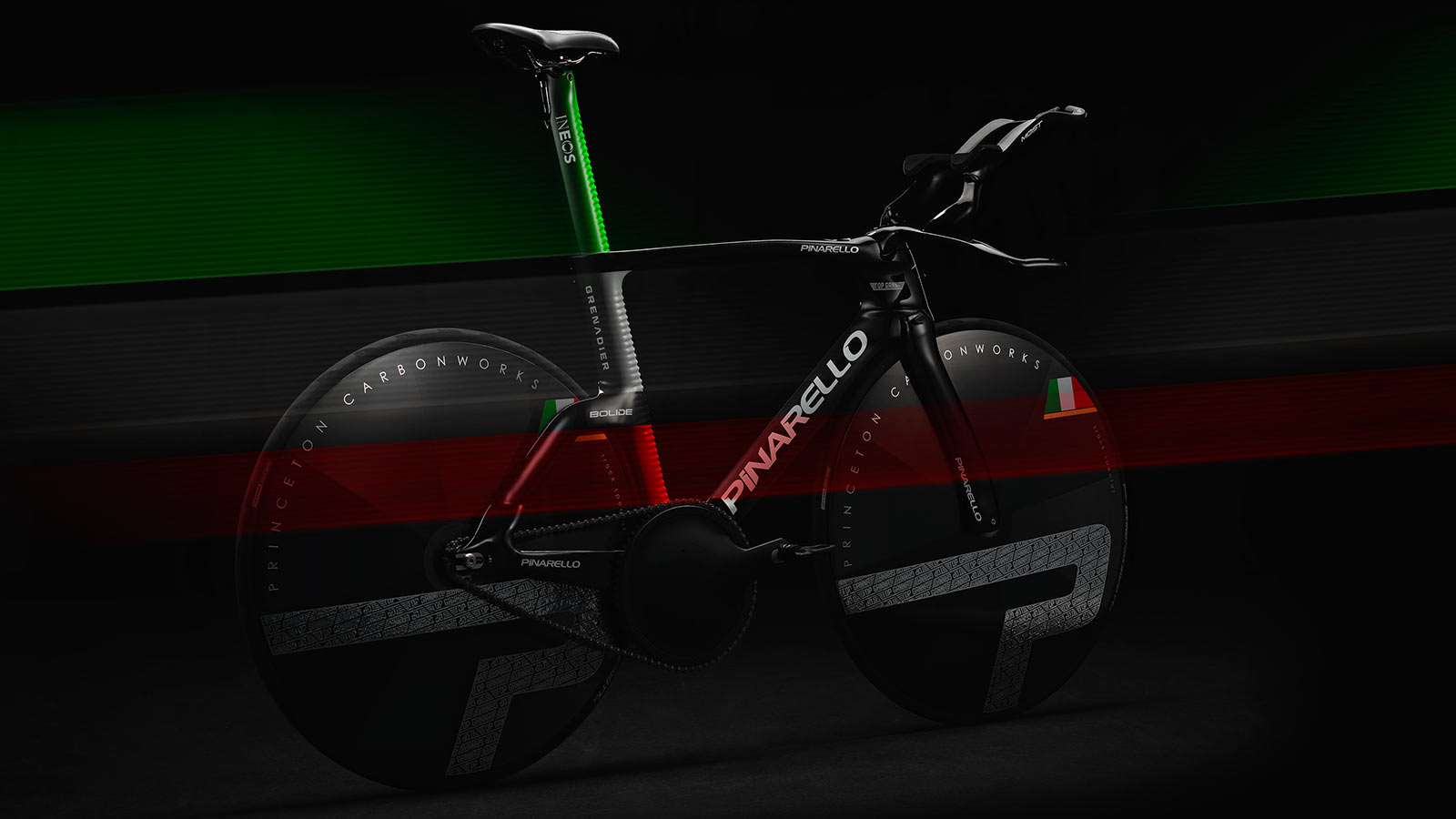 Plus, 3D-printing allowed Pinarello to get back closer to the deeper 6:1 to 8:1 aerodynamic sweet spot ratios for airfoil profiles on this  Bolide F 3D track bike.

While Hope went ultra-wide on their ultimate HB.T x Lotus track bike with its 3D-printed lugs joined by carbon tubes, as did Factor who 3D-printed ti for their Hanzo TT prototype hour record bike too, others like Argon 18 went ultra-narrow with a 40mm fork on their Electron Pro track bikes. Pinarello says the data on reduced drag of wide vs. narrow stays isn’t so cut-and-dry once you factor in the rider, so they stuck with narrow which yielded more stable aero improvements overall. 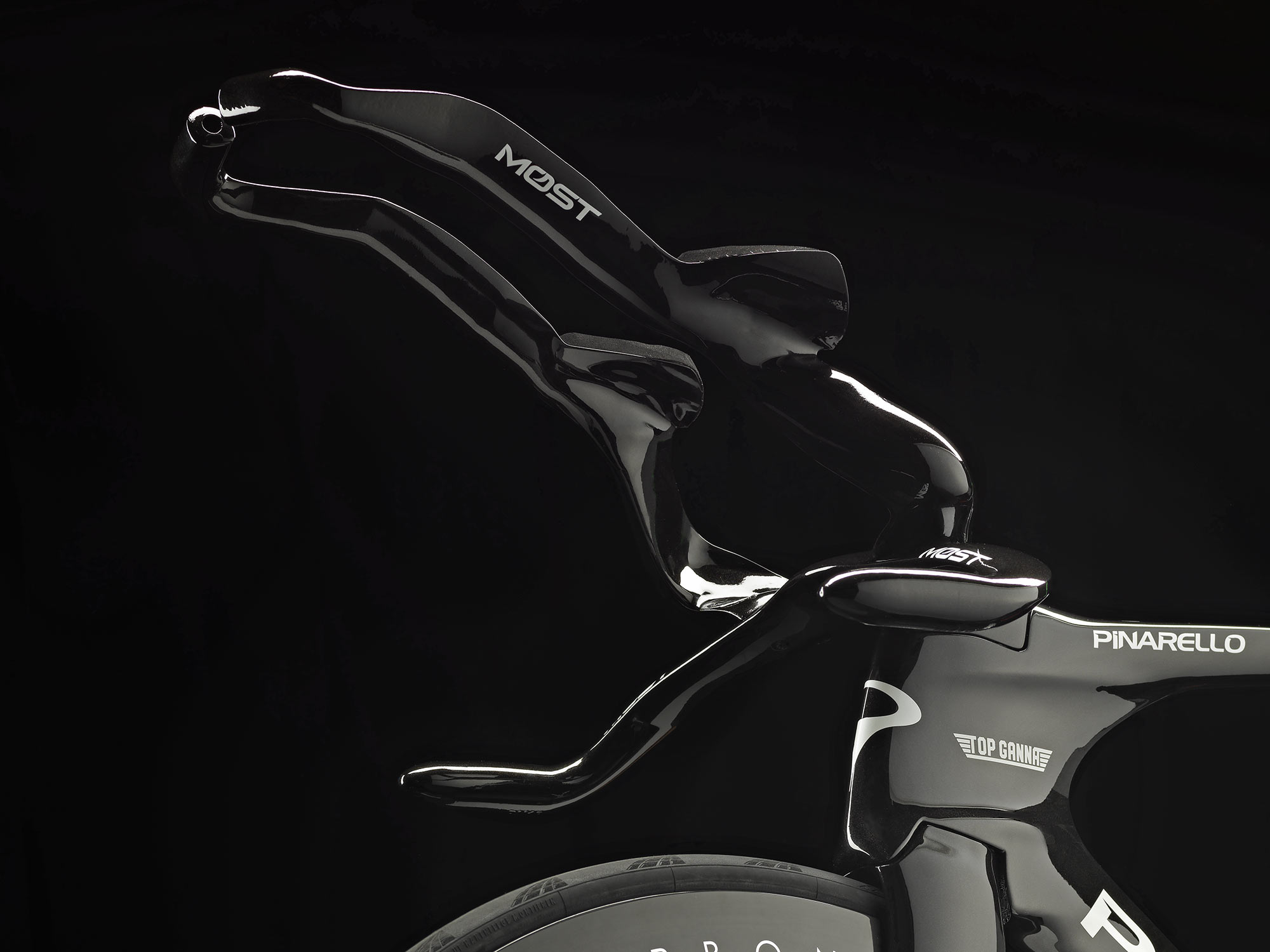 Just like the seattube & stays that have to be faster WITH the rider, Pinarello developed a new unconventional handlebar that on its own actually increased drag, but together with Filippo Ganna, reduced overall drag. The 3-piece base bar and curvy bolt-on extensions were 3D-printed 6Al-4V titanium. 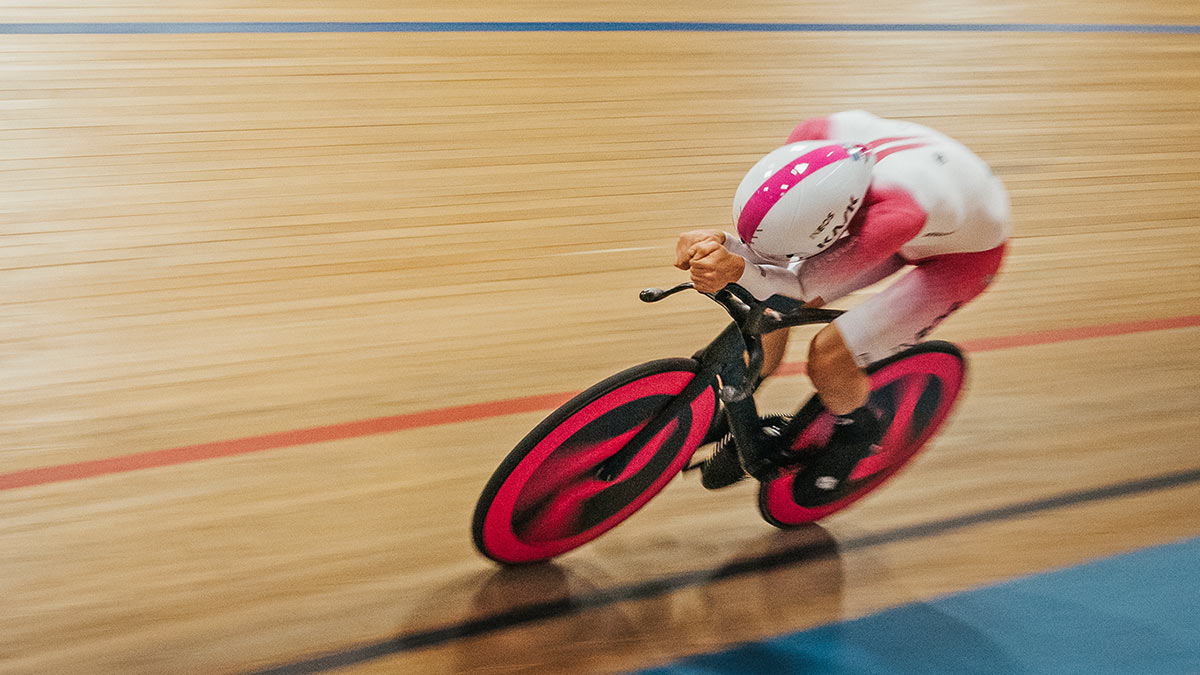 This new 3D-printed Pinarello Bolide F HR 3D has already proven itself to be faster with INEOS performance engineer Dan Bigham riding it to the current 55.548km UCI World Hour Record back in August on the unlabeled bike he helped develop – and with a next-gen Muc-Off Ludicours AF chain. 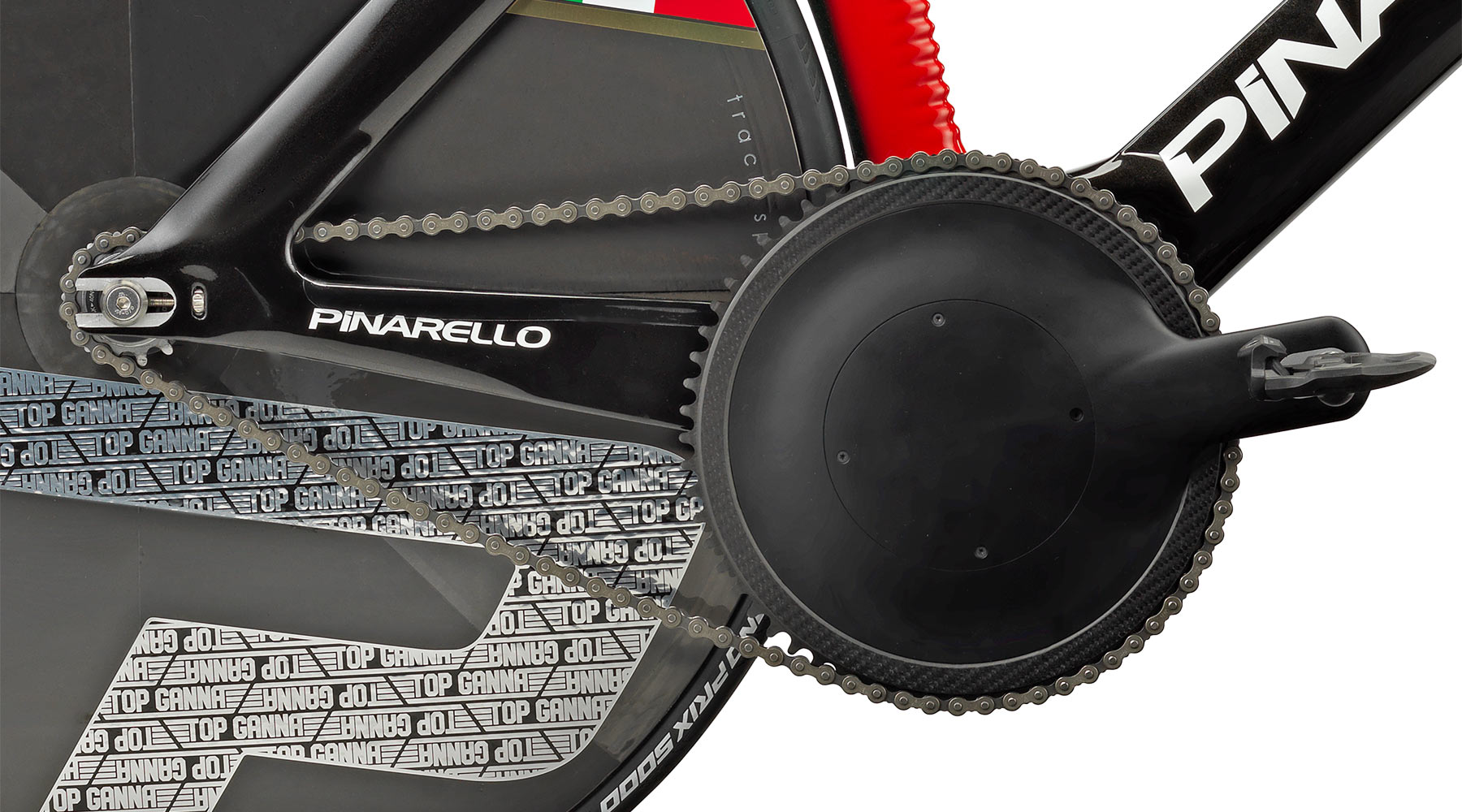 Interestingly, the INEOS bikes also have a prototype crankset that Bigham is working on, too.

This week it will be Filippo Ganna’s chance to one-up his team engineer on October 8th. 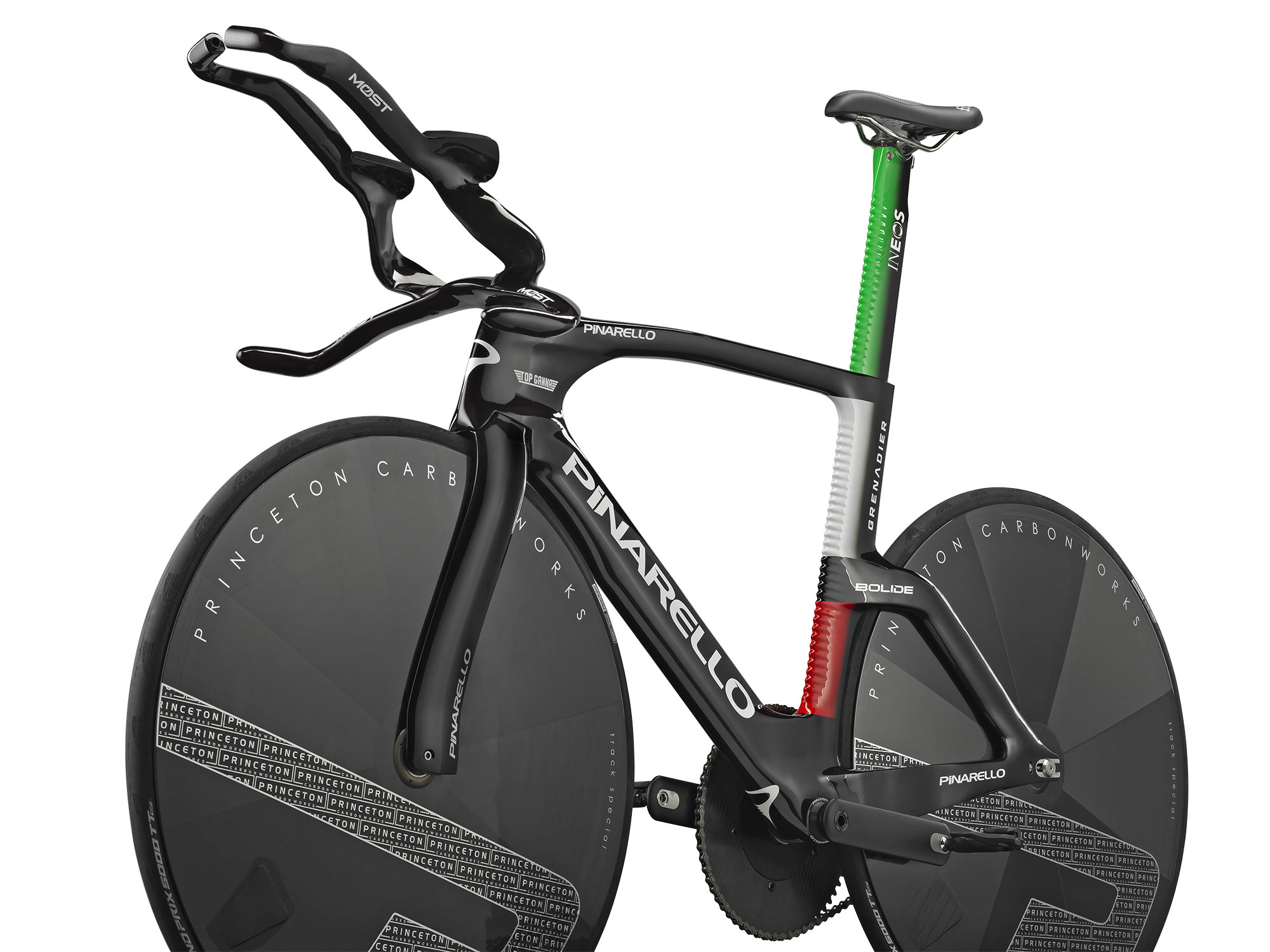 But equally as cool… Pinarello confirmed that now, the “Bolide F HR 3D is available for ordering at a Pinarello’s official retailer starting from today, and due to the 3D printing production technique, it will be built only on demand.” So all the amatuer Hour Record hopefuls out there with an infinite budget can now get the latest track bike tech, too! 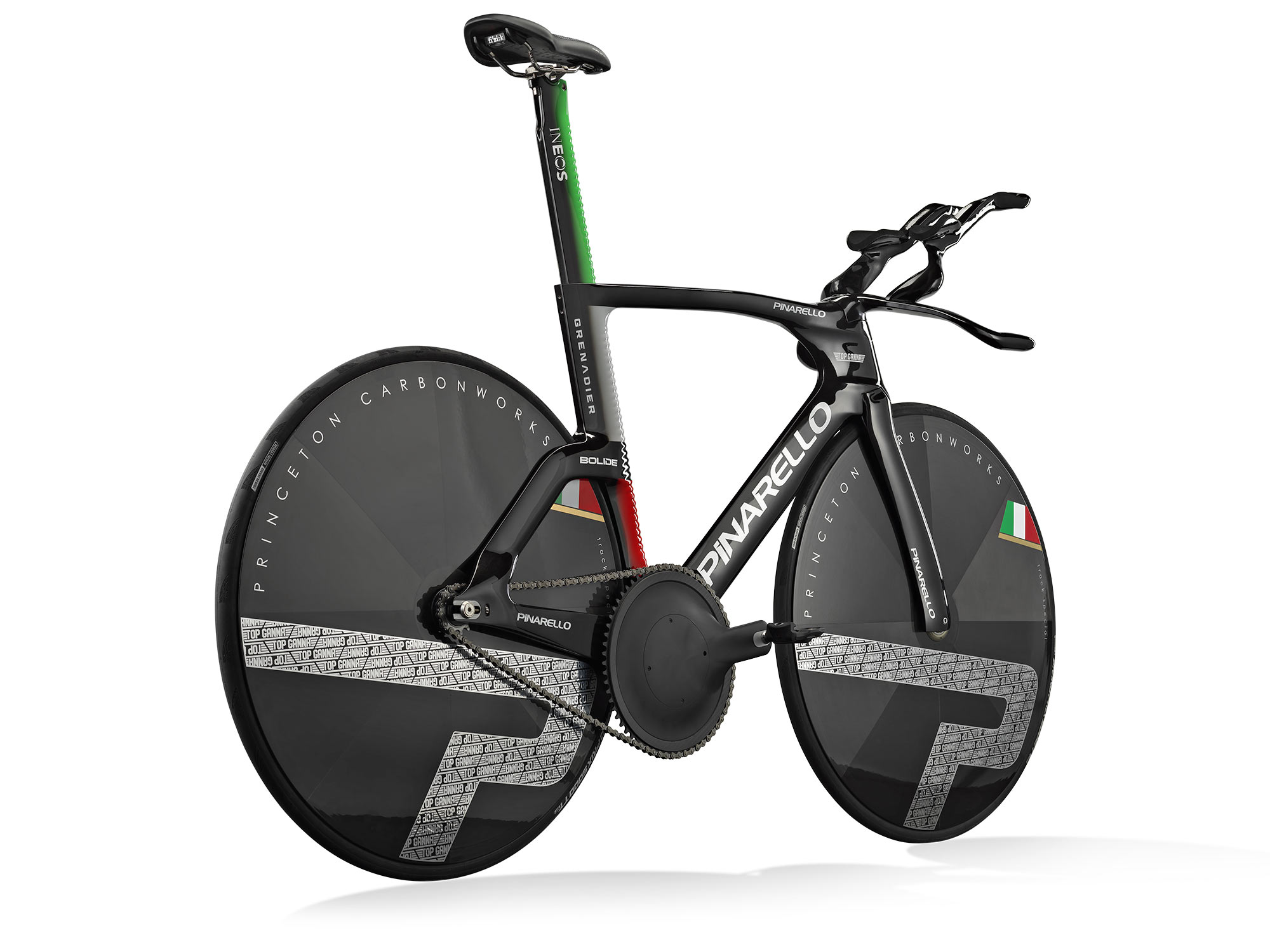 “This is such a unique project; we believe it’s the beginning of a new manufacturing era. The next step will be to make it more affordable by finding ways to scan riders with more affordable equipment and automatically design each unique bike. From a world champion, to every World Tour rider, and eventually to each and every cyclist out there,” according to Pinarello’s Chief Marketing Officer, Federico Sbrissa. 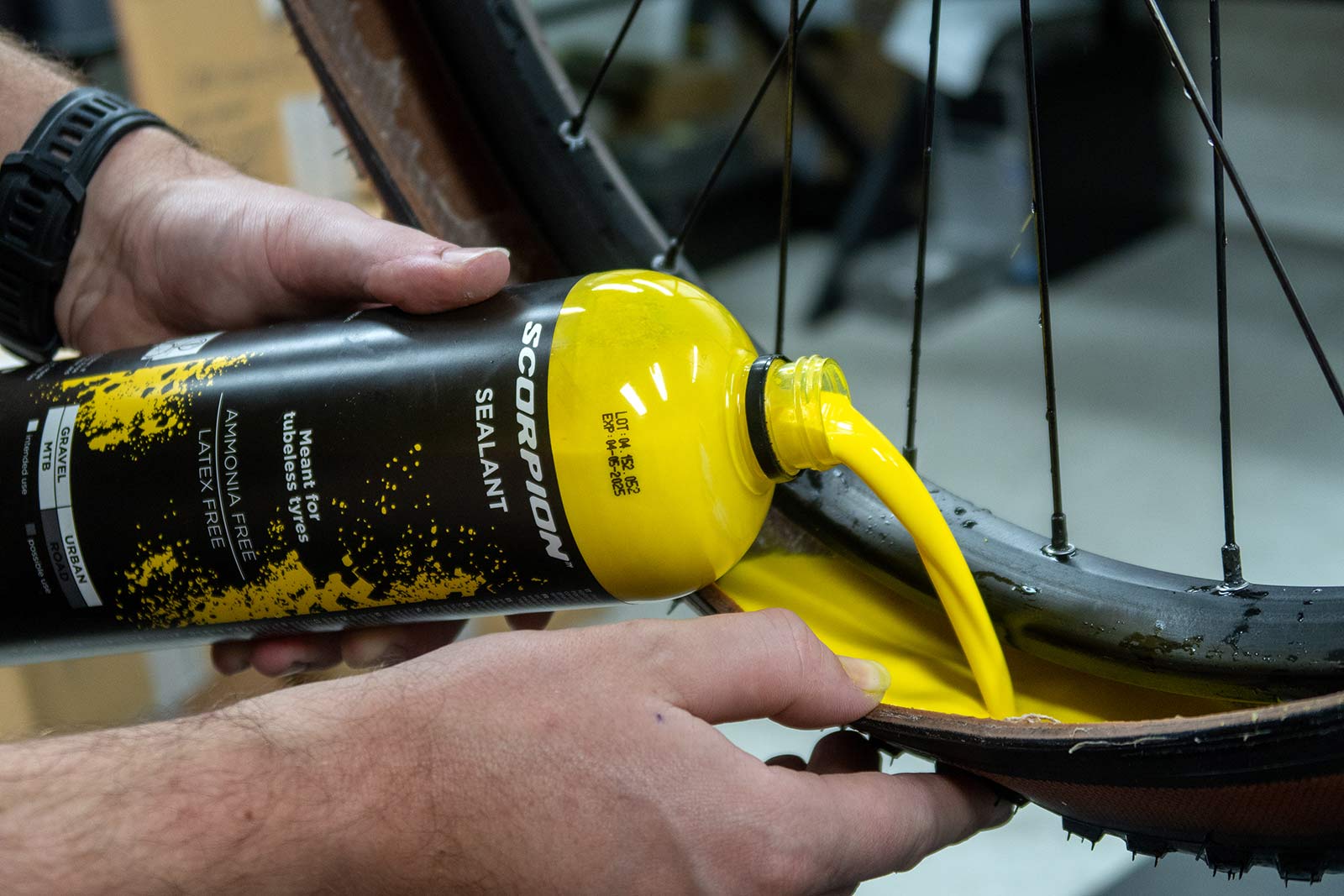 The new Pirelli tubeless tire sealant comes in two unique formulas, one for high-pressure road use, and the other for gravel, mountain bikes, and urban/commuter bikes. Both are bright yellow, 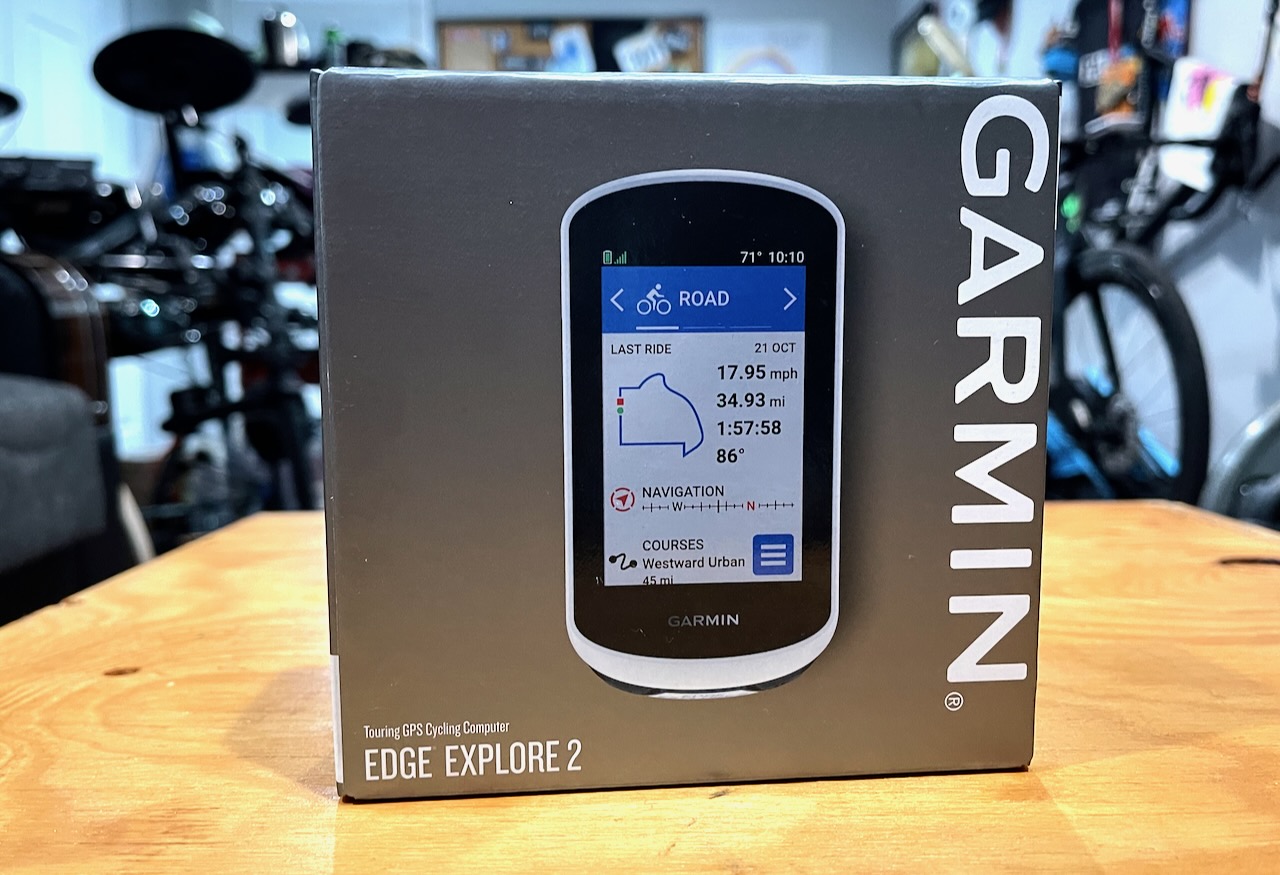 Fresh off the release of the all-new Edge 1040, Garmin unveils the Edge Explore 2 and the Edge Power Mount. Looking to pounce on the ebike and adventure market, Garmin 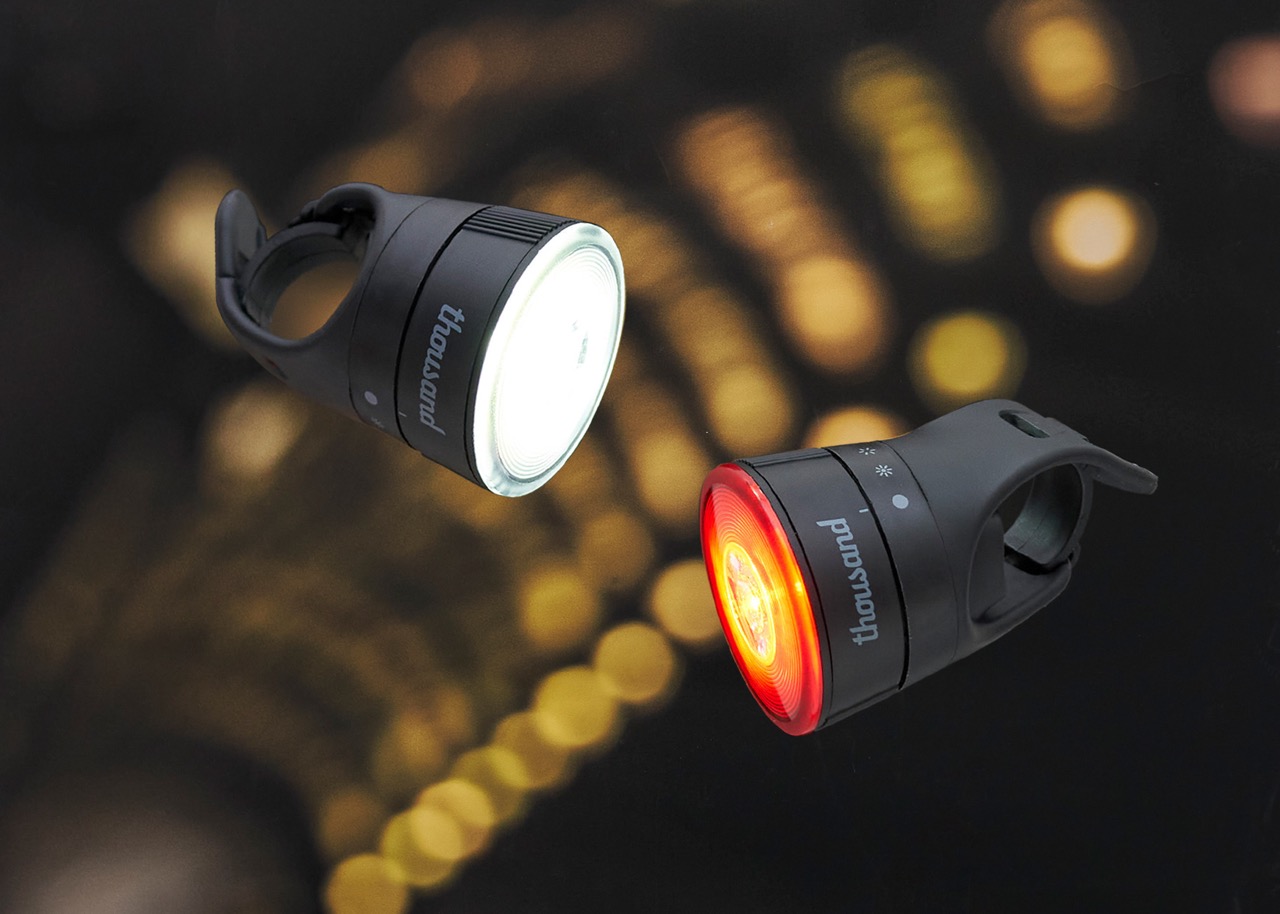 Posted on July 29, 2022 by Ron Frazelle Support us! BikeRumor may earn a small commission from affiliate links in this article. Learn more. From the very beginning, starting with