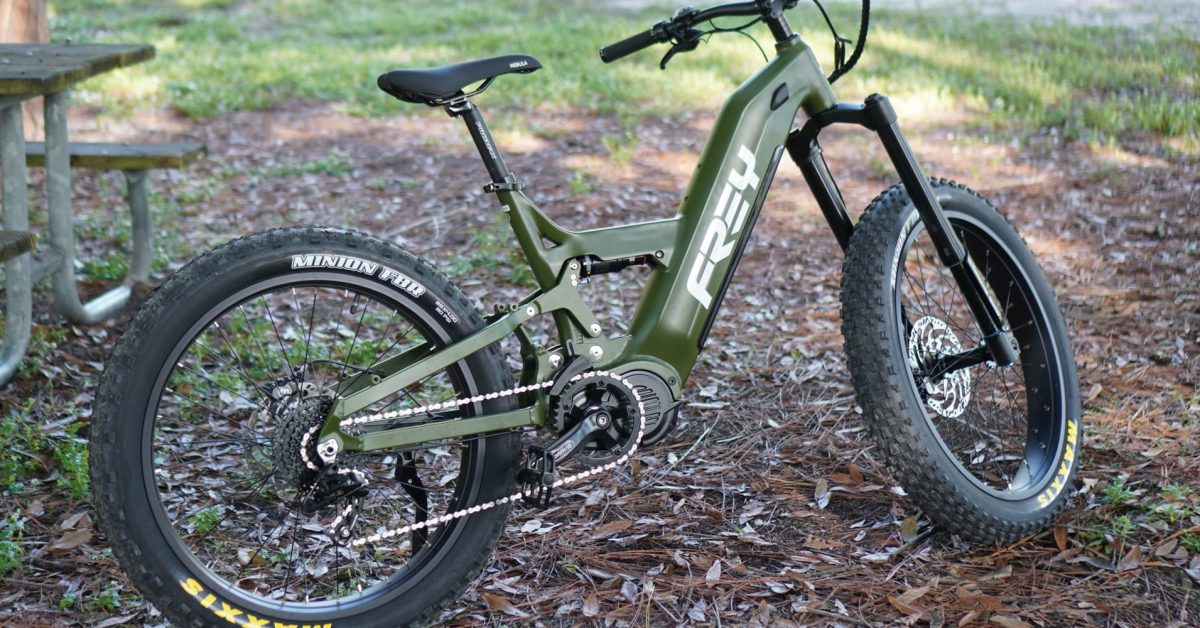 The FREY CC Fat is the latest evolution of FREY Bike’s popular CC model. What started out as a full-suspension commuter bike gained fat tires earlier this year to turn into a dual-use commuter and trail bike. But this is no ordinary full-suspension fat-tire bike. Instead, it comes loaded with high-quality parts and a ridiculously powerful motor.

We’ve seen plenty of fat-tire full-suspension e-bikes before. They’re usually in the $2,500–$3,500 range, though we’ve been lucky to see a few budget options slip under the $2K mark.

The FREY CC Fat is nothing like those other e-bikes. And the price reflects that. Coming in at just under $4,500 at its current sale price, the FREY CC Fat is a high-end e-bike that brings comfort riding to the trails with the proper parts to match.

Take a look at my video review below to see what this e-bike can do on and off the dirt. Then keep reading for my in-depth written review.

FREY’s reputation precedes it, with the brand being known for building quality full-suspension electric bikes that rival those from big name companies, yet at half the price.

There are two main differences though. Despite FREY bikes using many of the same components, they’re made at the company’s factory in Jinhua, China, instead of at some European facility. And they’re much, much more powerful. I toured FREY’s factory in 2019, shortly before China closed off to outsiders. There I was able to test many of the company’s models including the recently released original version of the FREY CC. These guys know how to build top-notch e-bikes, so don’t think you’re getting something second-rate here.

The second difference between FREY’s e-bikes and their high-quality European counterparts is that FREY’s models are much, much more powerful.

They use Bafang M620 mid-drive motors, which are rated at 1,000W continuous power but actually peak closer to 1,500W of power.

That means that the bikes can climb like a billy goat. When they aren’t using that incredible power and torque (peaking at 160 Nm) for climbing, they’re using it to go fast. I’ve hit as much as 36 mph (59 km/h) with this motor, though the bikes come limited to street-legal settings that can be modified in the color LCD display.

The mid-drive motor with its torque sensor makes for a great pedaling experience, which isn’t the case on many fat-tire e-bikes that are basically light electric motorcycles with pedals. You can actually have a great experience pedaling the FREY CC Fat, making it both a powerful e-bike for ripping around on trails and a good exercise/fitness e-bike when you want to take it slower and keep it in a low-power mode.

As a commuter bike, the FREY CC Fat’s fast top speed on throttle or pedal assist is a big part of its safety, meaning you can take the lane and keep up with city traffic.

When you’re on the trails, the power helps overcome obstacles and climb steep terrain. I rarely get going much faster than 25 mph (40 km/h) or so off-road on the Frey CC Fat simply because it’s hard to get going that fast on rough, twisty terrain. The few times I can find a straight stretch of trail to do it sure results in a fun ride, but you also have to be mindful of whether you’re sharing the trails with other people, especially on multi-use trails.

The high-end RockShox suspension comes into play when you do take the bike up to higher speeds and hit obstacles like roots and pot holes. Between the fat tires and the full-suspension, you’re going to be able to hit rougher trails and roads at higher speeds than you could on other e-bikes.

And the suspension is also a big part of the bike’s comfort, though that’s also due to the geometry. Because the FREY CC was originally designed for commuting, it’s a much more upright ride than FREY’s more mountain-focused e-bikes. I actually prefer a more upright ride and so the FREY CC Fat feels like a nice compromise to me. It’s upright enough to enjoy it recreationally but still gives you good control when you do hit the trails.

Now the downside of the fat tires is that the bike isn’t nearly as nimble as others. I’ve taken the FREY CC Fat on the same single track trails that I sliced and diced with the FREY EX Pro. The latter is a dedicated electric mountain bike that is closer to the downhill mountain biking end of the spectrum. And the experience was night and day.

But that seems okay to me, since the bike isn’t really meant for technical riding. It’s more of a rails-to-trails nature ride type of e-bike. It’s something you can cruise the bike lane with in the city, hop into the car lane in the suburbs, and then hit the nature trails at your local trailhead.

In addition to the comfortable but less responsive fat tires, the motor is one other component that comes with both advantages and disadvantages.

That powerful motor constantly reminds me that I have to be extra careful with my shifting when using high power modes. FREY outfits the bike with the best chains they can, but no bicycle chain is truly meant for putting 1,500 watts of power through it on a constant basis. So you’re undoubtedly going to wear through chains fast if you use high power and a lot and there’s a real chance that you’ll break a chain if you’re trying to stay in too tall of a gear too often.

If there was a way to make this a belt drive e-bike, that’d be the single best improvement to the bike that I can imagine. It would mean that you wouldn’t have to worry about chain stretch or wearing down gear teeth. But I’m not sure there are transmissions out there that can handle it. A nice Rohloff internally geared hub may work, but you’re talking about adding a potential $2,000 or more to the price. Some Rohloff hubs cost $1,500 just for the parts, let alone the belt drive and any markup that would have to follow.

So since belt drive doesn’t seem to be on the horizon, I know that I just have to keep proper shifting techniques in mind. That mostly means not shifting under load and not staying in high gear when I don’t need it. It’s tempting to forget those basics when you’re having so much fun and focusing on the trails around you, but it’s important to keep shifting in mind.

With plenty of range from a 48V 21Ah battery with 1,008 Wh of capacity, the bike has what it takes to manage the trails or the streets.

It’s a well-made, high-quality e-bike with excellent components. It may be heavy at 36 kg or 79 pounds, but it feels much lighter when you’re riding it. If you ever needed to lift it onto a bike rack though, lord help your back.

All in all, I’m super impressed with this e-bike. I could have appreciated a fender set or a rear rack, but both can be tricky on full-suspension fat-tire e-bikes. And I’ll ding them for not including LED lights. But the bike is still a blast to ride. It’s got the power and speed of a light electric motorcycle, yet in a fun-to-pedal electric bike. The FREY CC Fat may be expensive, but it’s worth the price. In fact, I’d say it’s worth even more. 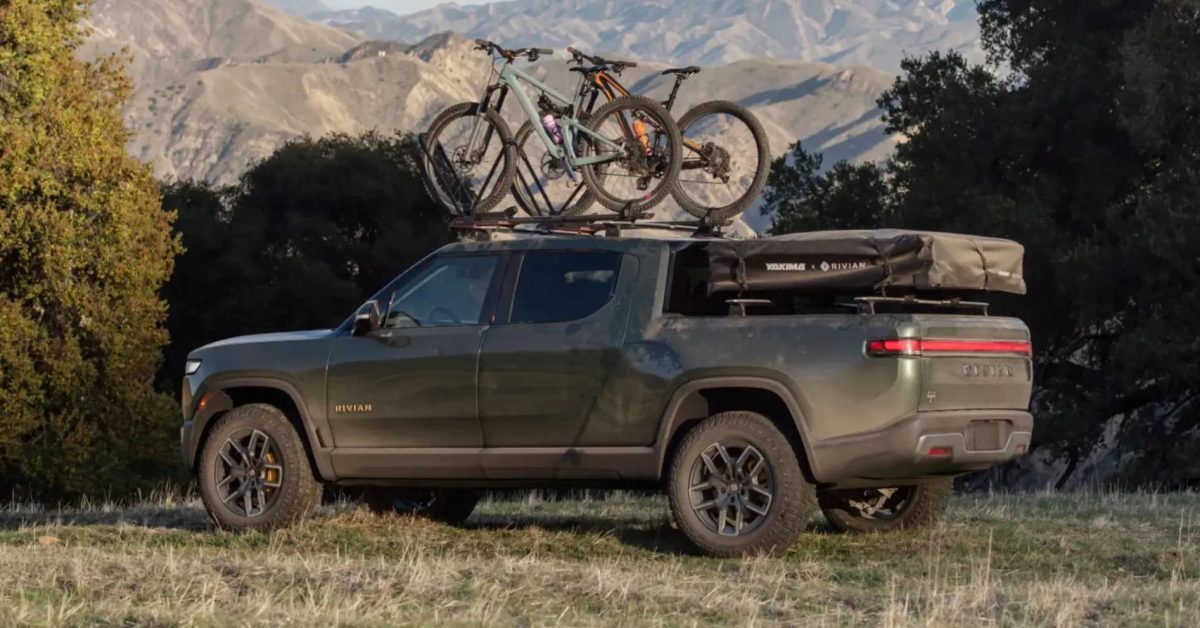 California-based automaker Rivian is best known today for its electric trucks, but could tomorrow’s Rivian be an electric bike? That possibility is looking much more certain now that the former 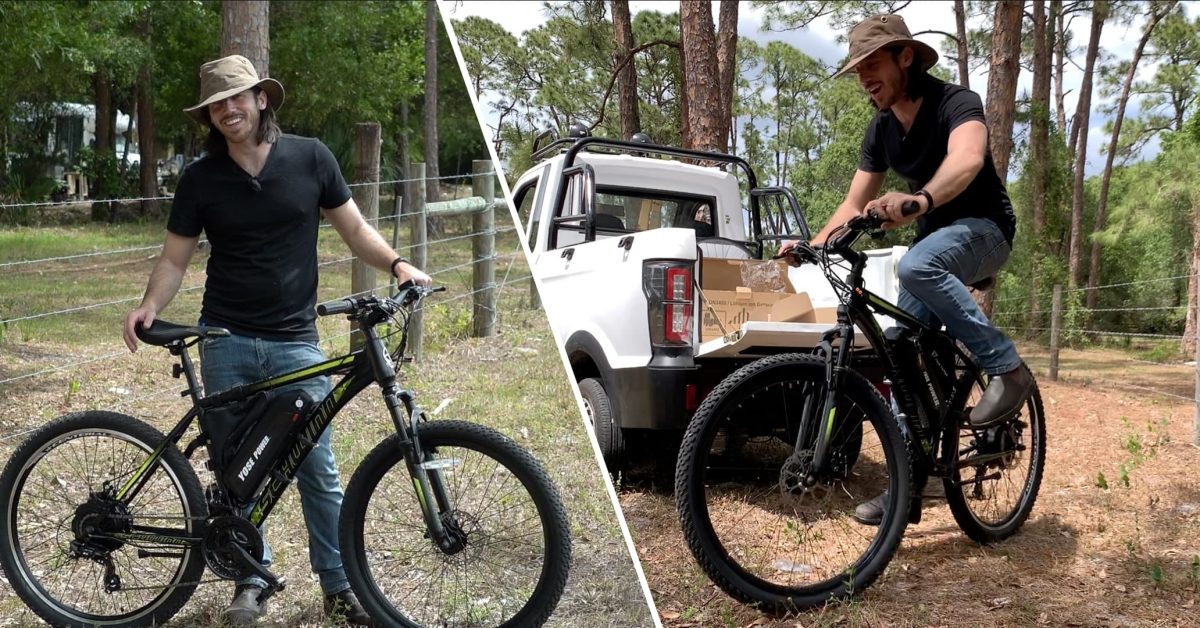 If you know anything about me or the topics I cover, you’ll know two of my biggest hobbies revolve around electric bicycles and DIY projects. So combining them has always 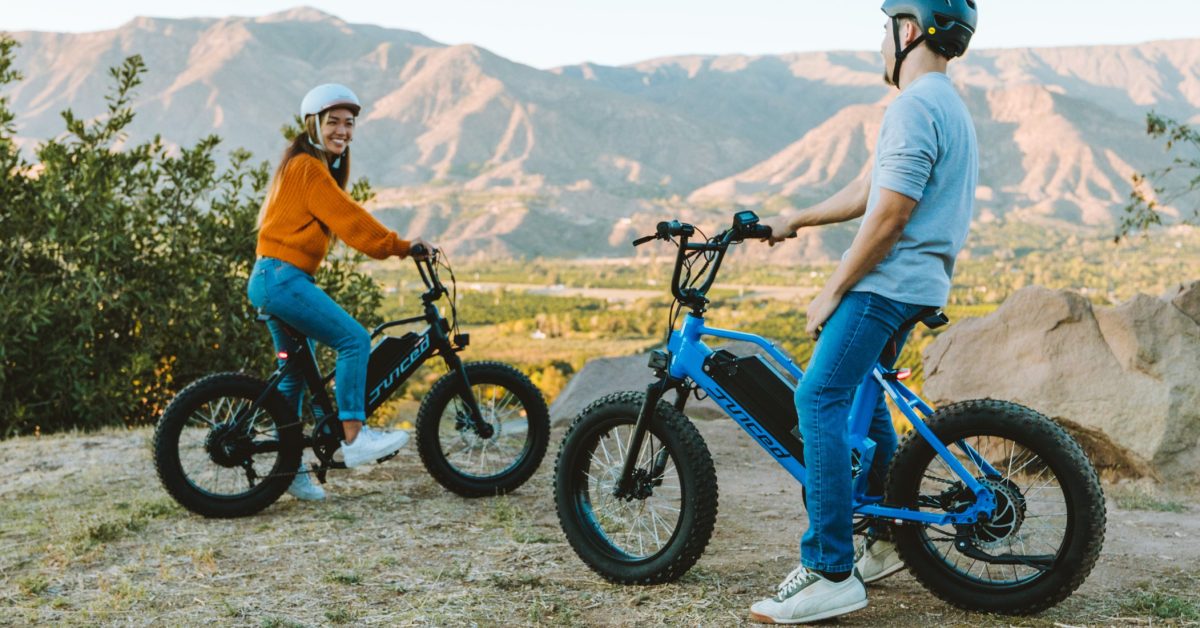 San Diego-based Juiced Bikes unveiled and then launched its newest e-bike model, the RipRacer, last November. Now the company’s founder and CEO Tora Harris is taking us on a behind-the-scenes